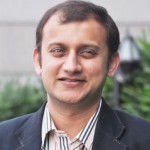 Kushal Sanghvi is every bit the Digital Evangelist. A penchant for advertising, media and communications has driven him to this industry where he has thrived at since the last 21 years.

A large part of his innings has been with new media and technology. He sees New Media as an integral part of brand expansion. Globally and across Asia his stint with iconic companies such as Reliance Group, Fremantle Media , Havas Media, The Times of India Group, Concept Group has led to unparallel intelligence in Digital thereby creating marketing success stories for those brands.
At his capacity as Managing Director, South Asia at Havas Digital which he founded, he also led the company for its social media across a global committee that was headquartered at Paris.

He has also essayed roles in Print, Television, OOH, Content and the invention of wireless and telephony revenue for the pioneering show ‘Indian Idol’ for Sony Television in the country. Having worked with over 400 brands in his career till now he always willing to learn more and that’s what keeps him going daily. He has worked with brands across verticals and some of them being best iconic global brands to also having worked with many local brands in India too. He has also worked with various brands, departments, divisions of the Govt of India too and helped them in various facets of marketing, brand and technology.

Being a creative thinker with a passion for creating products, platforms and solutions his most poignant creation being the inception of Rediff.com as a founder member, a tipping point in his career graph.
An MBA from NMIMS, he loves playing mentor and terms people management as a stepping stone to achieve targets and has been an active guest lecturer in leading institutes across India: the various IIM’s, IIT’s, NMIMS, SP Jain, JBIMS, ISME, MET, Rizvi, Wellingkar, MICA, ISB, Indira Institute, Somaiya, Nirma Institute, XLRI, FMS, Symbiosis to name a few. He has done his doctorate in consumer behaviour with regards to the impact of the various roles of media and communication triggers. He has also been part of platforms like Teach for India and in his spare time also teaches at various NGO’s, slums and villages across the country as he believes that education is a two way process and a country like India that has its largest population in its youth and also in smaller cities needs to all be trained and envisioned for a better India.

He is receipent of over 50 awards locally and internationally in the domain of advertising, marketing, media, digital and technology and has been voted by various tabloids, publications, media like Exchange4media, Afaqs , Campaign, World Brand Congress as being among the top 10 digital marketers in the country for many years now. Afaqs has featured him as among the top 50 newsmakers in media in 2014 and 2015.

Kushal is a regular speaker at various digital and marketing events and platforms such as FICCI, IAMAI, Ad Club, Afaqs, E4M,TFMA, NASSCOM, Campaign, Adobe, ICOM Global, CII to name a few where he loves to champion the cause of new media and garner new talent into this industry. Recently in 2014 was one of the only 2 Indians to speak at Websummit which is the largest digital marketing festivals in the world that attracts over 30,000 people. Has also spoken for at the largest mobile marketing platform at World Mobile Congress at Barcelona in 2015, which has over 1,20,000 attend in and he was one of the few Indian’s to speak there. He has been part of the jury for various marketing, media, advertising awards in the last over 8 years. He is also on the board of some leading international marketing and digital associations like CEBIT, TFMA, Ad Tech, ICOM Global, DMAI to name a few.
In his last role at the Reliance ADA Group where he was leading all digital marketing across all group companies and work closely with the CMO’s, CEO’s and others to achieve some success for the various goals and objectives of the companies. It is a strategic role as being part of the corporate team and working in all facets of digital marketing- be it creating content, putting a website together, looking at new technology, tools, platforms, social media, driving the marketing campaigns for customers, media planning and buying, creating business plans and strategies for digital and mobile, defining along with various external and internal partners- strategy, customer mapping and more for the group. Having said that the role didn’t only up about strategy but have been responsible for setting up and founding an internal digital marketing services company/ agency ( World Wide Open- WWO) that serviced various group requirements with a wide variety of talent that has been hired in, but in fact this company has also been serving various other brands outside of the group too.

In his spare time Kushal loves to read, write, watch movies, travel and explore the world, meet new people and explore new cultures, hike, listen to all sorts of world and Indian music, paints. He loves all that’s tech and is often always the first to try new technology, gadgets and more. He is a car freak and loves to drive, often dabbles in a game of badminton and tries to keep fit with being in nature and doing his walks or a good swim.