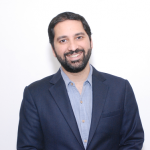 Mr. Kunal Suri heads operations for the India region and is designated as the COO and MD of foodpanda India. (Need inputs to add to the current role)

Kunal became a part of foodpanda in mid-2015, with the focus of streamlining and strengthening the operations in India. With an overall experience of about 13 years, Kunal started his career with McKinsey & company where he worked as Senior Analyst and co-led the daily operations of the team – by managing projects intake, staffing, capability building, promoting services offered within the global McKinsey network. He also co-founded the Analytic Service Group at McKinsey that offered services in the area of data analytics.

Prior to this he served as Director at Dot Communications where he was involved in brand positioning, media buying and client servicing with the additional role of expanding revenue streams.

Kunal holds a Master’s degree in Business Administration from INSEAD.