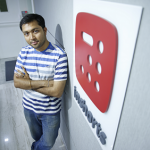 Deepit Purkayastha is the co-founder and Chief Strategy Officer of Inshorts Medialabs Pvt. Ltd., the company which owns India’s highest rated news app – Inshorts (previously known as News in Shorts). Deepit is a Computer Science and Engineering graduate from IIT Kharagpur where he started building Inshorts in the final year of college along with his co-founders from IIT Delhi.

Launched in 2013, today Inshorts serves more than 3 million users and was recently rated one of India’s best apps by Google.